My Knead For Bread

As amazingly simple as bread can seem, finding the right recipe is incredibly hard. While most recipes contain the basics: flour, yeast, salt, water and fat (butter, oil, lard, etc.), some also require eggs, milk, sugar. Even the simplest of recipes have different ratios of flour, yeast, salt and water. How then do you find the right one? Trial and error. Unless you are lucky enough to know someone who makes amazing bread already and will willingly give their recipe. I am not that lucky. I grew up with white bread from the store. In starting this adventure, I had hoped it would be pretty simple. As with some many skills that were considered "basic" when my grandmother was a child, basic does not mean easy. Are the recipes easy? Mostly but that doesn't mean getting the flavor you want is easy. Please do not let that discourage you because once you find the perfect recipe for you, you will find bread making a wonderful addition to your life. Does it require some time? Yes but just like with laundry, when you load the washer and then the dryer, the results are something wonderful. Yes it took time for the bread to rise, not once but twice. Yes you had to wait not only for the bread to cook but also for it to cool but the smell of fresh baked bread? Can't buy it. The pure joy that comes with cutting that first piece and savoring it (usually knife still in hand)? Priceless. 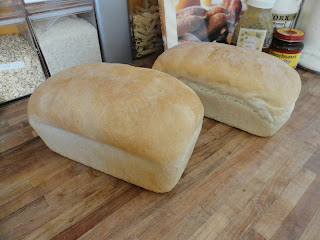 Equipment:
Scale: I now use a scale for measuring dry ingredients. It makes a huge difference in the flavor and texture. Not sure? Get one and measure a cup out like you normally would, then check how much it weighs.
Kitchen Aid Mixer: Say what you want but one of my requirements for the kitchen is a Kitchen Aid. My grandmother had one, my parents have one and I do too. (I got one for Christmas the first year I had officially moved out. The looks I got at the airport when I flew it home in my baggage... so worth it!) I have never found a better mixer and use it for everything, including my bread. Just make sure you "lock" the mixer when you make bread so that it doesn't bounce up and down, left or right and straight off the counter.
Oven: I use my bread proof feature for the rising. It keeps the oven at 100 degrees and I can put my bowls/pans directly it. If your oven doesn't have this feature, you can allow you bread to rise in a warm sunny spot. I have read about plenty of people putting it on their dashboards on spring or fall days. Just remember not to let it get too hot or you could kill your yeast before you bake it.
Pans: I use one glass and one stone because that is what I have. My stone one is a little longer than the glass so the glass one produces a taller bread while the stone produces a longer loaf. I like that my stone doesn't stick, ever but my glass one always does a little. Apparently you have to let the bread cool a bit before you pop it out. In the recipe I use though it says to remove immediately. I let it sit and it will slide out in 5 minutes or so. 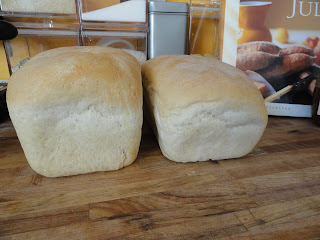 A Note on Ingredients:
It very much makes a difference what brand you use. The flavor changes depending upon your flour, butter (or oil). As you will see below, the butter made all the difference in the world.

Also, all recipes that called for sugar were replaced with honey. You can replace sugar with about half the amount of sugar called for. You must also adjust the liquids to account for the liquid honey.

The Recipes:
Instead of writing multiple articles and doing a series, as was my original plan, I realized that after making so many batches of bread, it would probably be better to give the results all together and let everyone decide which recipe they want to use.

The first recipe I tried was out from Made From Scratch. (Great book. Check out the review.) My first mistake was using the wrong yeast. I used instant instead of active. The bread came out incredibly yeasty tasting. The flavor of bread just wasn't there for us. Of course when I tried to make it a day or two later with the correct yeast, it barely rose at all. The bread was yeasty and incredibly dense. I tried this recipe once the wrong way and twice following the recipe correctly. All three times, the bread was too yeasty and not very flavorful for us. 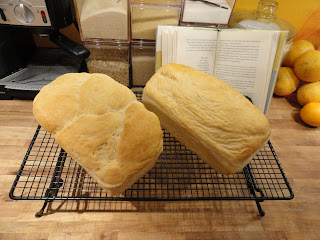 The second recipe I tried was from Make the Bread, Buy the Butter. This bread came out alright but didn't have a lot of flavor. It also was a little crumbly for making sandwiches. It was also a little on the chewy side on the outside. 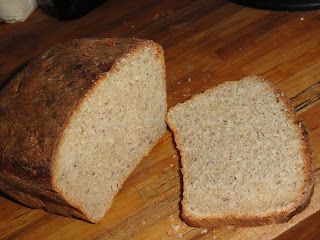 After four batches of bread (two loaves each) I was starting to get a little annoyed. I mean really, people make their own sandwich bread all the time, what was wrong with me? Frustrated, one Sunday night I sat down at the kitchen table and began to go through all my cookbooks. I made two piles, one with basic bread recipes and one without. I found three books with before I stopped looking. The third book was Baking with Julia. Now I don't know about you but just the thought of trying to make a Julia Child recipe makes me nervous. Is it rational considering that she was who taught normal people to cook French food? Nope. The remained though, what happened if the recipe was a flop? Then I would know for sure that it was me and not the cook books. I decided that the next day I would make her recipe. I set the other two cookbooks aside, with the recipes marked, just in case.

The loaves of bread made with the Julia Child recipe (see adapted recipe below) where always really good but not fantastic. Finally I decided to try different brands because the bread had everything I wanted except the perfect flavor; it is light and fluffy, holds up well for a sandwich, consistently rises and cooks evenly. It was just a little bland at first. So after three or four batches, I tried a different butter than my normal BJ's organic butter, specifically the High Lawn Farm's lightly salted butter. (The recipe calls for unsalted.) Wow, the flavor change was amazing. Next I decided to try the King Arthur's Organic Flour because I love King Arthur products but usually their organic products are just too pricey for me. Then BJ's started to sell the organic bags (for cheaper than my bulk health food store price/lb) and I was in heaven. The butter and flour changed the flavor of the bread immensely. It was really good before. Now it is beyond reproach, with a that's all she wrote folks thrown in at the end. 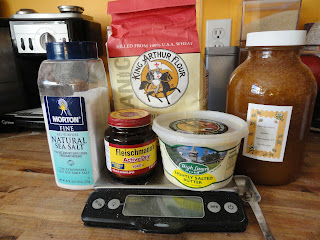 Turn on oven to Bread Proof. Put the yeast directly into my Kitchen Aid mixing bowl. I then mix my honey and hot water (put the honey in first then fill with hot water until it reaches the 1/2 c. mark. I use a mason jar for convenience.) I stir until it has dissolved completely, making sure to double check that there is only 1/2 c. total.

Pour over yeast, stirring a little to combine. Place bowl into oven and allow to sit for 5-10 minutes, until the yeast is foamy and has mushroomed up.

Put bowl on mixing stand, add remaining 2 cups of water and add half (15 oz) of flour. Using dough hook, mix. Once mixed, add the rest of the flour, making sure to go slowly enough that the flour doesn't jump out of the bowl. If, after a few minutes, the dough has not come together, add another TBSP of flour (up to 2 TBSP). Once a dough has formed, add the salt. Allow to mix for a minute. Add the butter, one TBSP at a time. The dough will look like it is coming undone but it will come together again. Mix on your machine for 10 minutes on medium speed. The book says that, if you have a desire for hand kneading, you can use your mixer for 5 minutes and knead by hand for 5 minutes. (I have never felt a burning desire to knead dough although the recipe from Made From Scratch has you knead by hand and it was rather meditative and an excellent arm workout. I can see it being a form of punishment for children, like peeling potatoes in the military.)While dough is mixing, grease a big bowl. After 10 minutes of kneading are completed, turn the dough out onto a floured surface and form a ball. 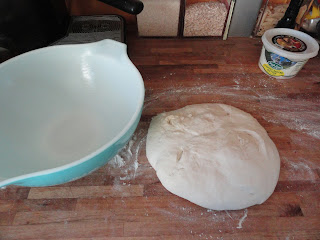 Place into buttered bowl. Turn the dough in the bowl to evenly coat the ball in butter. 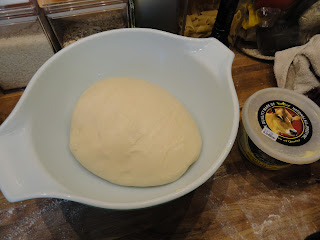 Cover with a light, damp cloth and place into preheated oven or warm place. Allow to rise one hour or until doubled in size. 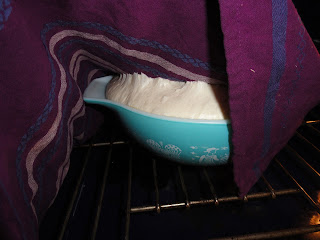 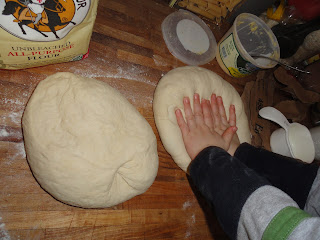 After the dough has risen, remove from bowl and punch down on a floured surface. Make two equal balls and form into loaves. I use my scale to make doughs even. 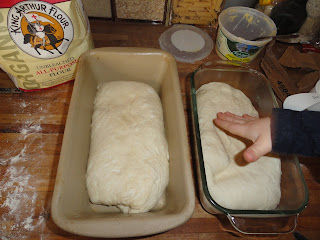 Place shaped loaves into buttered pans and return to oven for 30-45 minutes. 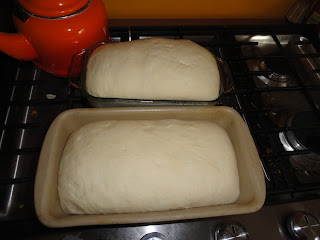 Remove pans from oven and set pans on counter. Heat oven to 375 degrees. Bake bread for 35 -45 minutes or until internal temperature is 200 degrees. I tested mine with a candy thermometer the first two times but now I know that 35 minutes is enough. Depending on the amount of honey I use, sometimes the tops start to brown a little early (with 10 minutes still left on the cooking time.) so I place a lose piece of foil over the top. I don't form it, I just cut the piece and set on to of the two loaves (which are side by side in the oven). this has stopped the bread from browning too much. I place my bread on the bottom rack however most recipes suggest the middle of the oven. You know your oven best.

Remove pans from oven and bread from pans. Allow to cool on cooling racks. This is important: allow the bread to cool. If not the bread will get chewy. I don't always do it but it does make a difference on the end result. 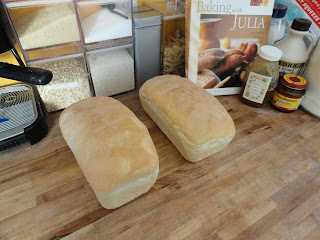 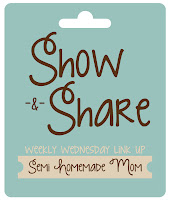 This article was shared on The Peaceful Mom, Prep Utility Vehicle, The Self Sufficient Homeacre, The Prairie Homestead, Growing Home, The Backyard Farming Connection, Wildcrafting Wednesday, My Turn for Us, Farm Girl Blog Hop, Weekend Kitchen Creations, My Humble Kitchen
Email ThisBlogThis!Share to TwitterShare to FacebookShare to Pinterest