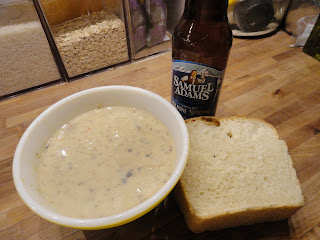 Even though I have finished reading the book (see the review here), some of the recipes in the book still haunt me, especially at dinner time. Usually I don't have enough time to make whatever I was thinking about but I did decide to make an effort to make the fish chowder when I got the other morning.

In planning to make the chowder and because we were out, I made fresh bread first thing. What goes better with homemade soup than bread? (You can find my bread recipe here.)
Here is the author's description of the recipe:


He sautéed minced onion in our homemade butter, added a handful of crushed, dried sage, and when the onion was translucent, he sprinkled in flour to make a roux which he loosened with beer, in honor of the fisherman. He added cubed carrot, celery root, potato and some stock, and then the fish, cut into pieces, and when they were all cooked through he poured in a whole morning milking's worth of Delia's yellow cream.

This first order of business was to make sure that I had all the ingredients. I had most of the ingredients and give it a go. The only catch was the I didn't have any fresh fish. (Yes horrible pun happened unintentionally but then I liked it enough to leave it.) I decided to use some canned sardines that I try and keep on hand for quick sandwiches. I figured that if it came out horribly, we could always have scrambled eggs and toast. 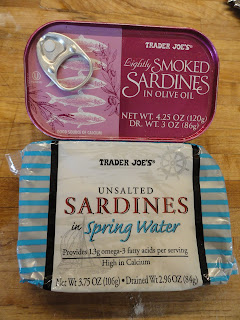 Feeling rather confident, I added about 2 oz of butter to a hot pan, adding the onion once the butter had melted. Adding a small fistful of dried sage. 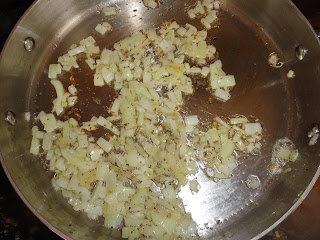 While the onion cooked, I cut up 4 carrots, 2 ribs of celery and about 2 lbs of small fingerling potatoes, tossing the fish on top. 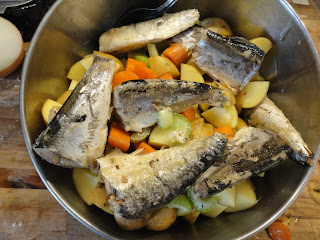 Once the onion was translucent, I added flour to make the roux and an entire bottle beer to deglaze the pan. Next I added the bowl of carrots, celery, fish and potatoes, topping it off with enough water to cover everything. 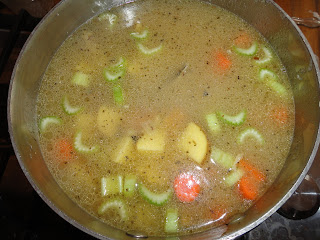 I simmered the chowder until the carrots were cooked through. Finally I added heavy cream to thicken and make the chowder creamy. I served it with warm bread. 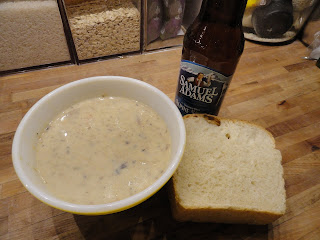 The Verdict? The kids, the husband, my sister and her boyfriend all loved it. The kids each had four small servings. My sister and her boyfriend finished off the rest that I reheated two days later and served with homemade yogurt biscuits. Yum.
This article was shared on The Peaceful Mom, The Prairie Homestead, The Clever Chick, HomeAcre Hop, The Backyard Farming Connection, Wildcrafting Wednesdays, SemiHomemade Mom, Lovely Ladies﻿
Email ThisBlogThis!Share to TwitterShare to FacebookShare to Pinterest