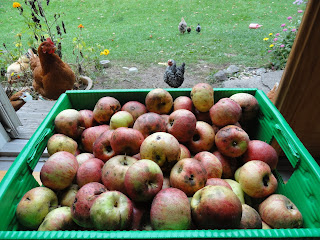 When we bought our homestead, the dream of putting in a full fruit orchard was vivid. Each year we have slowly added to our orchard, with this year being no exception. The difference this year is that we added a lot of trees. Not just one or two but more than 20. We added ten sugar maples, three crab apples, three heritage apples, three cherry trees, two peaches (one white one regular), three plums, two pears and an apricot. We also added two hazelnut trees near the chicken coop. While the new trees provided only a handful of fruit and some not any, the older, more established apples have been producing quality apples for the last month and show no signs of slowing down! An excellent, though exhausting problem to have.


We have two, maybe three, trees that are pretty much done, so I would say that they are late summer varieties. Another two in full swing and a few more not yet ripe. Needless to say, we have apples everywhere. Not using them seems like a crime.

The first and most obvious is apple sauce. I currently have over 18 gallons of canned applesauce in the basement and another batch in the crockpot as I type this, another six quarts or so.

So what else is there to do? A quick Google search will provide endless options. The next thing I decided to try was apple pie filling. I found this recipe and decided to give it a try. At the same time, I found a recipe for boiled molasses and was even more intrigued. The idea of making my own cider held some appeal so I decided to first focus on the pie filling. The recipe calls for 10 cups of water or 5 cups water, 5 cups apple juice or cider. Since I was already interested in trying to make some cider, on the first night, I made a big batch of cider.

The next day I used that same cider (refrigerated overnight) to make the apple pie filling. Here is the recipe I ended up using:

1 1/2 cups organic cornstarch
5 cups Water
5 cups Cider
2 cups Honey
1 tablespoon Cinnamon
1 teaspoon Nutmeg
1 teaspoon Salt
I omitted the lemon juice because more than half of the other recipes I found online said it was optional. 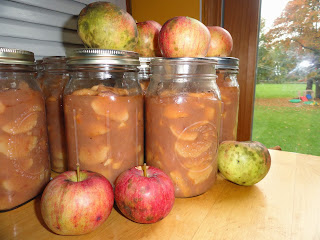 The result? I haven't tried it yet. I feel too guilty opening the jars when I have so may fresh apples. The jar filling definitely thickened though. If I hold the jar upside down the mixture doesn't even move around much. I cannot wait to try these at Thanksgiving.

As for the Boiled Molasses? I still haven't gotten there although I would really like to. Instead of finding recipes to use up my apples (I will admit it, I am not a fan of cooked fruit but I am slowly coming around), I have been looking for recipes using applesauce. I have found four winners far: 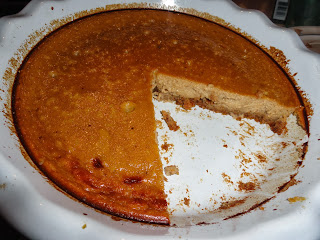 Preheat the oven to 350 degrees F.
Mix all ingredients in a mixer.
Pour into pie shell
Bake for 40 minutes.
I made this first as 1/3 of the recipe (using a small egg) in mini shells and they came out so well that I made a full pie the next day. It was well received both days. The full pie that you see above has a graham cracker type crust. We have three extra scones (see recipe below) from the weekend so I crumbled them in my hand, added some melted butter and a dash of maple syrup, mixed and baked for 12 minutes in the oven. I use that as my pie crust and made the recipe as directed. Delicious. Not too sweet and very smooth.
Applesauce Drop Scones 2 cups all purpose flour
1/4 cup maple syrup
1 1/2 tsp baking powder
1/4 tsp salt
2 tsp apple pie spice
6 tbsp butter, cold and cut into several pieces
1/3 cup applesauce, chilled
1/3 cup milk
Preheat oven to 400F.
In a large bowl, stir together flour, maple syrup, baking powder, salt, and spice.
Toss butter pieces in flour mixture and mix until it is sandy and no chunks of butter larger than a small pea remain. (I used my mixture to do it.)
Add in applesauce, milk. stir until the dough comes together.
Place either in drops or into butter scone pan. I use a mini scone pan I as given.
Bake for 18-20 minutes, until scones are set and spring back when lightly pressed.
Cool completely on a wire rack.
These were great. The kids ate most of them the first day, leaving 5 out of 24. The rest they ate for breakfast the next day and the left over (since they left the top off the container, got a little hard) and were used to make my crust for the custard above. We liked these so much that I made a second batch and froze it. We have been pulling out two for our afternoon snack. 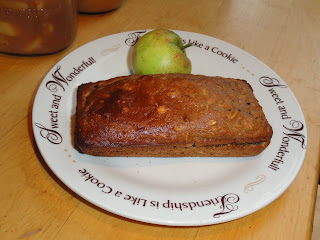 Applesauce Oatmeal Muffins
1 cup old fashioned rolled oats (not instant)
1 cup milk
1 cup whole wheat flour
1/4 cup maple syrup
1/2 cup unsweetened applesauce
2 egg
1 tsp baking powder
1/2 tsp baking soda
1/2 tsp salt
1 tsp cinnamon
Soak the oats in milk for an hour.
Preheat the oven to 400 degrees.
Grease pan.
Combine the oat mixture with the applesauce and eggs.
In a separate bowl, whisk dry ingredients together.
Add wet ingredients to dry and mix until just combined. Do not over mix the batter or the muffins will be tough.
Spoon mixture into muffin pan or mini loaf pan.
Bake for 20-25 minutes or until done. I baked for 25 minutes.
The verdict? Since I spent the entire day baking, I just froze these. I have been reheating/thawing them in the oven at 325 for 20 minutes first thing in the morning. It has been a wonderful way to heat the house, crisp up the edges and have a warm breakfast. I cut the bread in half length wise and add butter. We then cut it up and eat with our morning tea, coffee, hot chocolate or whatever else we are having, such as scrambled eggs. I have think these are a tad bit bland but really enjoy them with my coffee or tea. If you were just going to have as a snack, I would recommend adding a bit more cinnamon or even some nuts, dried fruit or chunks of fresh apples.
Banana Applesauce Chocolate Chip Muffins1 3/4 cups flour
1/4 cup maple syrup
1 tsp baking powder
1/2 tsp baking soda
1/2 tsp cinnamon
1/2 tsp salt
2 eggs
2 mashed banana
1/2 cup unsweetened applesauce
1 1/2 tsp cinnamon
chocolate chips
Preheat oven to 350 degrees Fahrenheit.
Grease pan.
Combine the dry ingredients.
In separate mixing bowl, mix together all the wet ingredients.
Add in your dry ingredients, one cup at a time, and mix well.
Pour the batter into your muffin tin(s).
Bake for 15 to 20 minutes.
The verdict? The kids love these. They are a perfect afternoon snack and a great way to use up ripe bananas. The chocolate chips definitely made the recipe better, although walnuts would also be a great addition.
So there you have it. My next project will be testing a number of applesauce pie recipes. I haven't gotten there yet because I haven't really wanted to roll out all those pie shells. I plan to make three or four different recipes at once so we can see which we like better.
How are you guys using your apples?

This article was Featured On Summer Acres

This article was shared on From the Farm, The Chicken Chick, The Prairie Homestead, The Self Sufficient HomeAcre, Freedom Friday, Mostly Homemade Mom
Email ThisBlogThis!Share to TwitterShare to FacebookShare to Pinterest