A few of you know that our family has been under the weather. We rarely get sick but when we do, we tend to be down and out for a bit. Thankfully, neither I nor the baby got sick so it wasn't as bad as it could have been. The boys ran low grade fevers on and off for a week causing us to miss out on some family Easter activities. My middle son is almost better but not quite if the copious amount of green snot is any indication.

Unfortunately, we are not the only ones who have been having some troubles. One of my Red Comets has been having some form of reproductive malfunction. Some days she lays an egg (or two!) sans the shell. Other days she lays really small eggs and some days really large eggs. I mean, really large eggs. Below is a normal Red Comet egg, Last Friday's egg, a small egg from this week and today's egg: 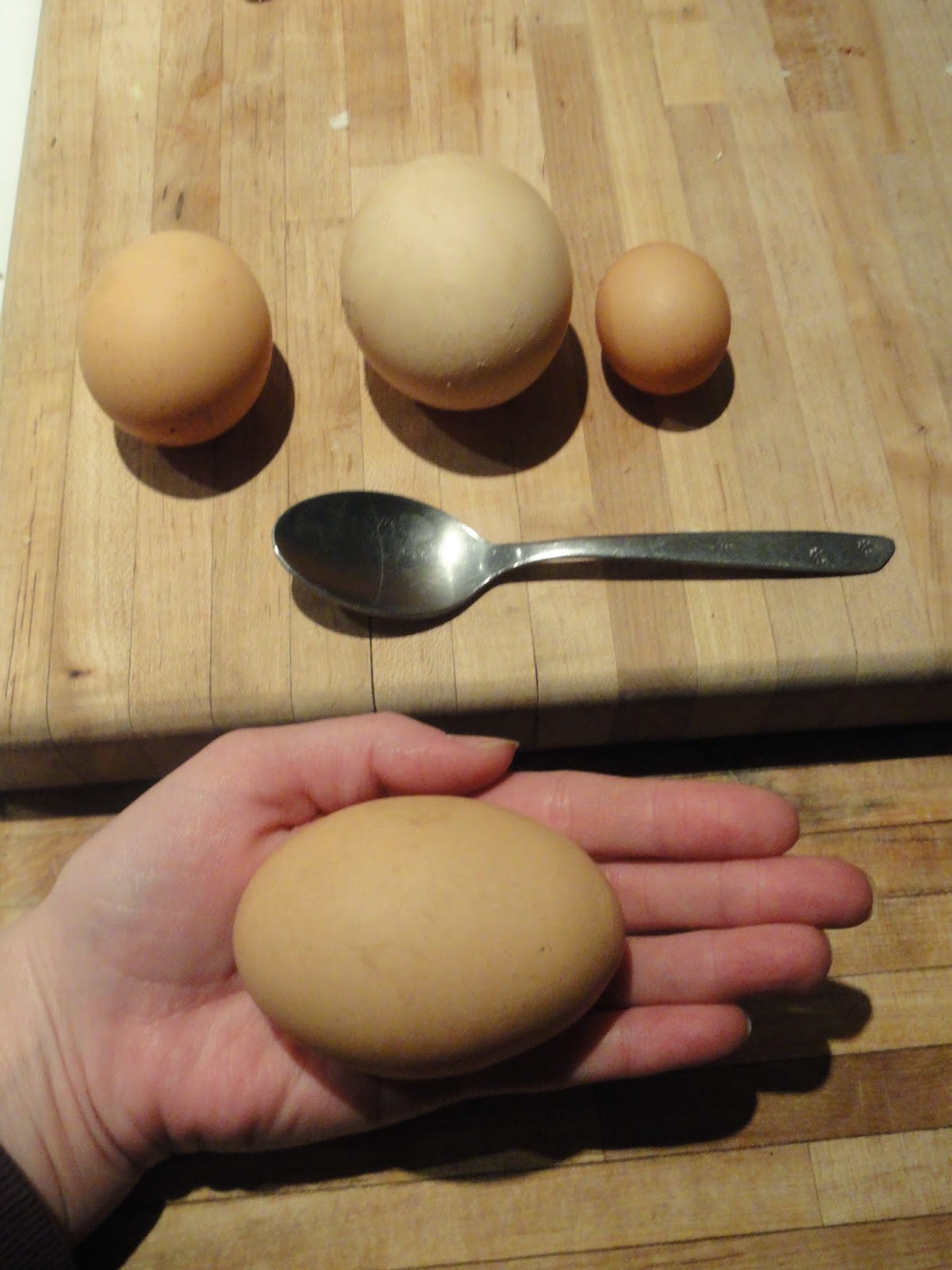 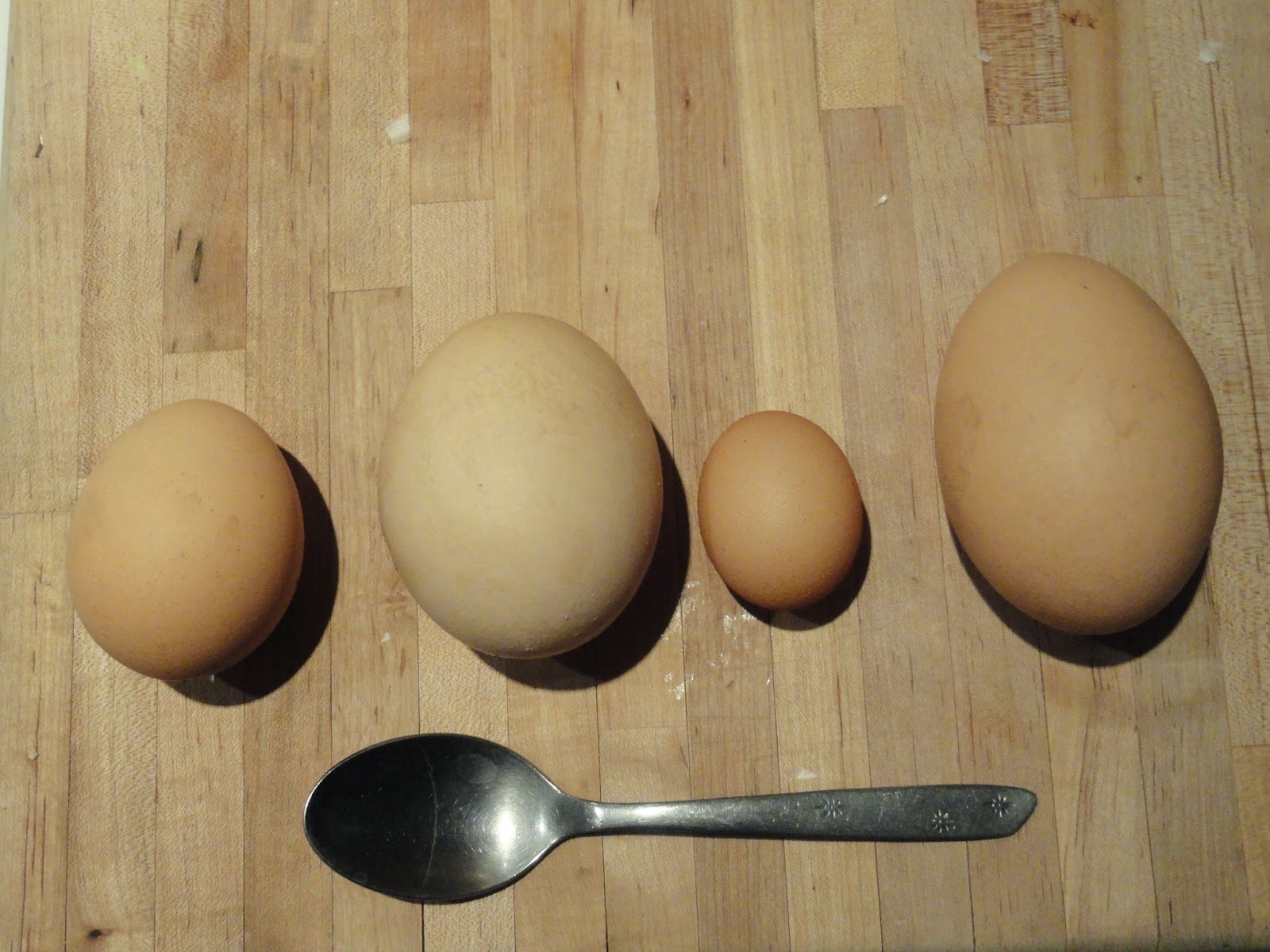 Last Friday she was having some trouble laying the egg. It was stuck! Now, I have read about being egg bound and how a hen will look like a waddling penguin but having never witnessed it, I was doubtful. Here's the thing, when experts say the hen will walk like a penguin, IT WILL WALK LIKE A PENGUIN! There is no mistaking it or guessing about it. I caught the hen for a second and tried to rub a little coconut oil on her vent as the bottom of the egg was sticking out. She just kept moving around, trying to squat and lay the egg every 30 seconds or so. She finally did lay the egg and everything seems fine. With six of the same chickens, they all look very similar so I am not sure exactly who is having the issues. For now I am keeping an eye on them and hopefully, this spurt of egg issues will pass.

As most people know, the world doesn't take a sick day just because you are sick. Mother Nature is no exception. All around us, spring is blooming. Despite feeling crummy, getting outside has been buoying our spirits. Here is a quick update of the goings on.

Goals:
Expand my weedless garden beds.
Grow corn for our chickens this winter.
Learn to forage and use forage items.

Get honey bees.
I ordered Mason bees! I picked out the small mason bee set up from Crownbees. I used a coupon code 'Selph Landing' for a 5% discount. They arrived within a week. The kids and I promptly put the 'house' together and outside. We are waiting until this weekend to put the bees outside even though a number of them hatched en route. They are being stored safely in the refrigerator with a couple of sugar water soaked cotton balls.

Get at least two turkeys for holiday dinners.
I found a local source for Blue Slate Turkeys.Right now we are planning on getting 6 of them when they hatch at the beginning of May.

Get piglets.
I was contacted y a local (hour away) farm that is hoping to have some extra piglets mid June. Hooray! They will be Berkshire mixes. We are hoping for two, at $125 each.

Add the following: rhubarb, blueberries, raspberries and strawberries.
Yesterday and today our order from Stark Bro's nurseries arrived. We planted everything today even though everyone is still a little under the weather.

Plant another row of maple trees.

Plant pines along the thruway border.
10 pine trees arrived from the Arbor Day Foundation today. We haven't planted them yet as we are getting twenty five more tomorrow from our Soil and Water Conservation District, along with 10 more raspberry canes.

We ordered the Gooseberry assortment but only one arrived. Instead we received a Blue Belle Honeyberry. Stark Bro's is sending us the Hinnonmaki Red Gooseberry and we get to keep the Blue Belle Honeyberry free. The only issue? Honeyberries need a pollinator. So, we ordered the Berry Blue Honeyberry. Thankfully they covered the cost of shipping so we only have to pay for the plant. I had never even heard of honeyberries. Anyone know of them? Do you have any great recipes?


We also ordered the Goji Assortment. Last year I had planted a goji berry plant that I bought from Nine Lucky Stars. The first one arrived dead, however I was assured I could just plant it and it would grow. It did not. They sent a replacement however that one has not really grown either. For having spent $30 on a tree that should have been at least two years old, I wasted my money and was extremely bummed. This Goji plant looks light years ahead of the dead stick I received from Nine Lucky Stars. (Their customer service was also terrible and took quite a while to get any response.)

We got three blueberry plants, the Sweetheart (a self pollinator), and an assortment that I couldn't find listed any more but contained the Northblue and the Northcountry blueberry. They are planted along the fence of the second garden. On the other side of the garden fence (outside the garden) we planted three Heritage Red Raspberry canes. In between is the garden we are planning on growing corn for the chickens and squash in.

In front of that same garden we built our strawberry beds. Today, our organic raised bed soil was delivered. We laid down cardboard to keep the weeds under control, then added a little winter chicken litter, and finished off with the dirt. We got the All Summer Long Strawberry Collection. The front bed on the right has the ever bearing, while the back two have the June bearing. The front left bed as a mix of all three, with each of the small beds (two small make up one big bed) containing 10 strawberry plants. This should allow for some extra plants/runners to grow.


Finally, in the orchard we planted a Chicago Hardy Fig tree. This was something I added to the order at a later date when it went on sale and I though, what the heck.

A Pawpaw and a Sunflower Pawpaw were also added, along with a cranberry tree. Except, well, the cranberry is a bush. Whoops! I picked the spot not realizing what exactly it was going to be when it was fully grown. I swear I did research before I ordered it but I must have let that information dribble out my ear one night. We planted it but are planning on moving it to lower in the field, out of the orchard tomorrow.


The homestead is slowly coming along. One season at a time. I haven't yet seen the film To Make a Farm (I desperately want to!) but one thing one of the farmers say is that if you have been farming for 30 years, you have only gotten to grow potatoes 30 times. This thought sticks with me and I think of that every time I think about how long it takes for something to grow. Some days I am bummed that I cannot tap our maple trees from last year or that our apricot tree hasn't provided any fruit but I know that that day will come and my children won't know that it didn't give them any apricots when they were toddlers (unless we tell them of course). They will remember that growing up, they had an orchard that provided them with all kinds of delicious fruit. Last year, we had apples and a few plums and pears. This year, we are hoping for a little bit of everything. Next year too. When my children are grown and someone asks them how long have they been growing (fill in anything), I hope they have to stop and really think about it. I hope the only answer they come up with is 'forever' or 'always.'

**I have listed the types of each plant we bought and linked them back to Stark Bro's website, should anyone want to know more info. We are not getting any kind of reimbursement from them, although should you be from Stark Bro's and reading this, please feel free to send me more blueberries, goji berriy, gooseberry, honeyberry and fruit trees!