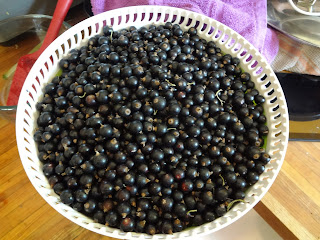 Did you blink and miss July? It seems that I did because guess what? It is August. Seriously, August. And not just any time in August but almost halfway through August! I would like to say that my July was spent being super productive and it kind of was. "Kind of" being the correct phrase. I spent the week after Independence Day preserving our black currants. The rest of the month though, I have been snuggling E2 and getting through the hot days of summer.

The first thing I did after picking currants was wash them and dehydrate a batch. This required the least amount of work and was easy to do between nursing and reading for naps. Our oven has a handy dandy dehydrate feature so washing and putting them on a tray is all that is required. Some people like to use parchment paper and I can tell you that it is easier, however I always remember that after the first time I do it. Some day I will remember sooner. 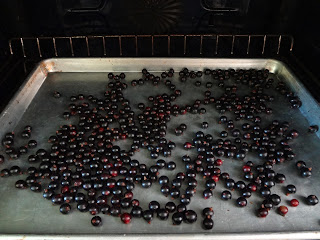 The currants took about 12-15 hours due to the humidity we have been having up here. The beginning of July wasn't hot, merely humid. 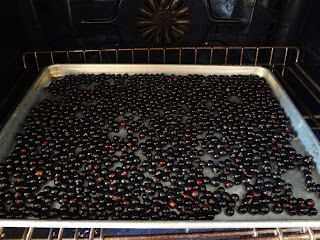 I did two batches and while the first was done much more quickly, the second batch took quite a bit of time. After they were good and dry, I put them in a canning jar and popped them into the freezer.

My next step in preserving our currants was to make jam. Since I don't want to use pectin, and really didn't have time to make homemade pectin, I decided to scan a few of my jam cookbooks. The Joy of Jams, Jellies, and Other Sweet Preserves

I put all the berries, washed with the stems removed, into the Instant Pot

with a cup or so of water and pressure cooked them for 10 minutes on high pressure. I allowed the pressure to release naturally. I mashed the berries a little then put them into a strainer to separate all the juice. 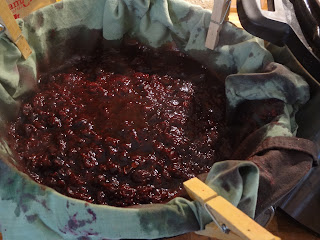 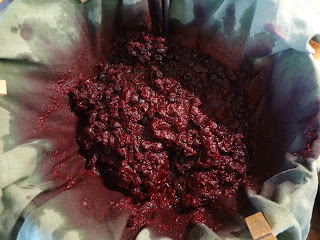 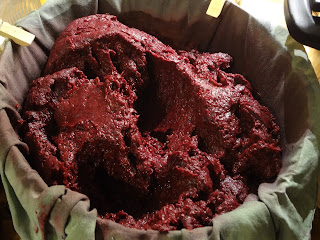 After a few hours, I was left with over two gallons of juice and lots of currant pulp. Currants are extremely good for you; high in fiber and contain lots of necessary vitamins and minerals such as calcium and iron and are high in protein. That said, I didn't want to waste the pulp. I will post some of the recipes I have been using to enjoy it later this month.

Currants are also high in natural pectin, however that pectin is found in their skin. Since I strained the skin out, I needed to add some form of fruit with pectin such as green apples, crab apples or... blackberries. Last year we had an exceptionally excellent crop of blackberries so we had 5 1-gallon bags of them in the freezer. I pulled a number out and thawed them while the currant pulp was draining. 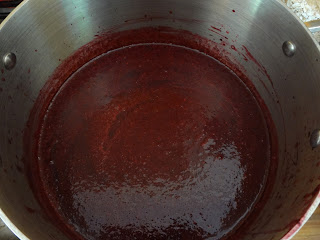 Bring the berries and juice to a boil and simmer.
After the juices have reduced some, add the honey (I used a cup or so.)
Continue cooking until jam is desired thickness. Jam will thicken further upon cooling.
Can jam and process in a hot water bath.

What have you been doing these past two months?
Email ThisBlogThis!Share to TwitterShare to FacebookShare to Pinterest