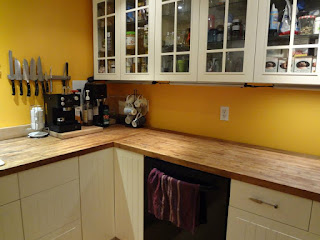 In honor of Cyber Monday I decided to do a quick post on things I love that can be bought. For the last year I have been reading about minimalism. Not because we want to live like monks but because we really do have too much stuff. Last February I stumbled across this article from becoming minimalist about what you don't need in the kitchen. I was very surprised that at how many of the items I would hate to do without.
Last night as I began to look around, I was struck by how many items in my kitchen I feel so ambivalent about. So it would appear that it is time to clean out the kitchen again. 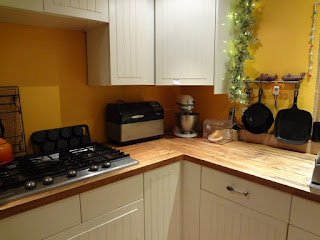 However, before I begin decluttering the house KonMari style (you can get a head start by reading The Life-Changing Magic of Tidying Up

. The book was really great and easy to read.), let's cover what is important to me in the kitchen, in order of appearance from left to right. 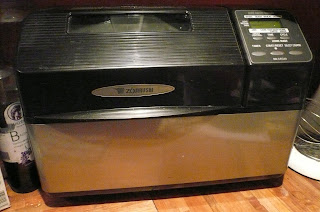 1. A bread machine
I have a Zojirushi Bread Machine

. My sister-in-law gave it to me when she upgraded to a different machine. I use my bread machine to make the dough. It gives it a perfect temperature for rising and mixing the ingredients. I use it 4 or 5 times a week to make bread, although with winter here I will probably use it more than that. The pan for mixing/baking is Teflon coated so I don't bake in it. It is a personal preference but I prefer to bake in a stone bread pan. Mine is from King Arthur. It was also a gift. I don't use the top and it fits the 2 lb dough nicely. Bonus, it was made in the USA.

This machine also has all kinds of features such as a cake feature, sour dough starter feature, jam maker. I have tried most, except for the jam making feature and they have all worked well enough.

If you are at all intimidated by making bread, get an inexpensive bread machine and start by making the dough in the machine and just popping it in the oven. 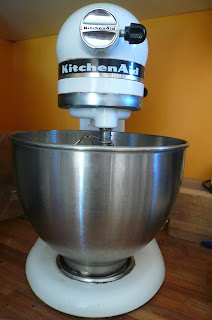 I realize that not all people agree that you need a

KitchenAid Mixer. They might be right, however I use mine all the time. I use it for mixing scones, mixing meat for burgers, making pasta

. I use the bowl when I am straining cheese that I am making. I use it every day, usually more than once. If I haven't used it, we weren't home that day.

When I was younger, I moved across the country for a job. That year, when I came home for Christmas, my parents got me one. The curious looks I got boarding a return flight still make me chuckle. I didn't want it to get tossed around with all the other luggage so I packed it in my carry on. Even as a young, unmarried woman, I knew the value of a KitchenAid Mixer. 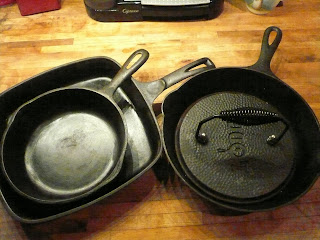 I have four cast iron pans: three rounds and a square. The small round one I use very rarely. It is perfect for a single egg and a slice or two of bacon, otherwise I just don't use it.  I also have a 9 inch cast iron skillet, like this one: Lodge Cast-Iron Skillet, 9-inch

. My larger round has a wooden handle, which on the stove top is nice because I won't burn myself on the handle. The bad part is that I cannot put it in the oven.

Finally I have a large square pan, like the Lodge Cast-Iron Square Skillet, 10.5-inch

. It may seem weird to have two shapes but the square one is great for french toast and pork chops, while the rounds are great for scrambled eggs (higher sides) or baking biscuits in. With our expanding family, I would really like a large 12-Inch cast iron round

Last year for my birthday, my husband also got me the Lodge Round Cast-Iron Grill Press

, which works well with bacon, hamburgers and when we make sandwiches on the grizzle. 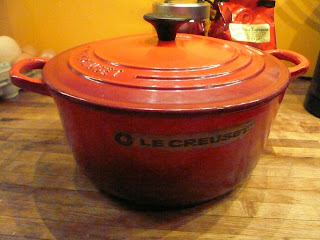 except this one is a pumpkin (if anyone wants to trade this pumpkin one for a kiwi colored round just let me know!), both that we received for our wedding. These pans are enameled and are perfect for fried eggs, browning meat and so many other things. I make oatmeal in them. I make soup in them. The picture above still has last night's dinner in it. I often leave the leftovers in the pot, let it cool, put it in the fridge and then pop the whole thing into the oven the next day for lunch. Could clean up get any easier? One pot, two meals, only needs to be washed once! 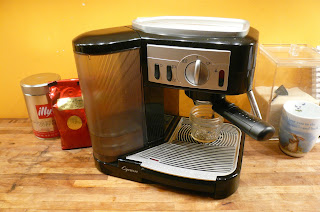 4. An espresso machine
Here's the thing, I don't drink that much coffee. I don't drink caffeinated coffee. I drink coffee as a delicious treat so I want it to be good. We first had a Capresso Espresso Machine

and loved it. It is inexpensive and worked for a couple of years with no problems. Then the gasket wasn't working right and we broke the handle on the portafilter. We finally decided to upgrade and purchased the Saeco Aroma Espresso Machine

. It has great reviews and people love it. The Saeco Aroma Espresso Machine has a lot less plastic and a huge water storage tank so we were pretty excited. That said, the coffee always tasted weaker to me so recently I bought another Capresso Espresso Machine

. As soon as we got the new Capresso, I was back to drinking 4 cups a day. The other nice thing about the Capresso? It is easy enough and fast enough to make a cup of coffee for yourself on your way out the door. It takes only a few minutes to brew yourself a cup.

When we were in Italy for our honeymoon, we fell in love with their coffee. The kind of coffee that keep coning up? Illy

. My husband drinks the regular Illy Espresso while I drink the illy Decaffeinated Espresso. My only drip is that it is not organic. illy coffee is committed to responsible and sustainable practices and from 2013 through 2015 they are listed as one of the most ethical companies.

Not to mention their coffee tastes great. However when I recently stumbled upon Urth coffee I was pretty excited. They sell organic, heirloom coffee that is roasted in smaller batches in a huge kettle. Their organic decaf World Peace is so delicious that I might switch completely. Too bad they are on the west coast and shipping is so expensive. The coffee is worth it though. 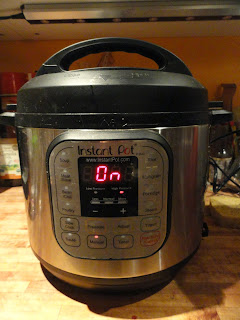 I use my Instant Pot

all the time from making beets and beans to oatmeal overnight (on the delayed timer). I make yogurt and meat. I use the rice cooker function because I burn rice. Yes I know, a real cook should be able to make rice. Alas, I cannot so I need a rice cooker. I use the crockpot feature for making chili. I use it 2-3 times a week.

So there you have it, a bunch of my favorite kitchen items. I also have three awesome knives: Wusthof Santoku Knife

. Aside from a couple of steak knives I could get rid of all the other ones.

What are your kitchen must-haves?
Email ThisBlogThis!Share to TwitterShare to FacebookShare to Pinterest