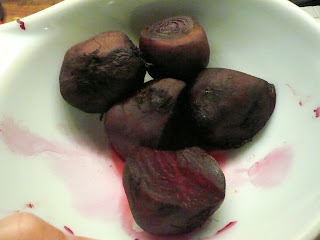 As part of our winter CSA, we got a bunch of beets. The kids love beets and I had planned to pickle and can them using the recipe from Preserving by the Pint

but... well, life got busy and I only got them half made. How do you half pickle beets you may be wondering and trust me this wasn't some kind of weird science experiment. Instead it was a delicious accident caused by being too busy one night and refusing to let anything go to waste.

Let me start at the beginning. In order to pickle beets, they must be cooked enough to peel. I cook them in my Instant Pot

for 25 minutes using the manual setting on high pressure. Then they are cooked enough to peel. This time though I made double, enough for dinner, cut smaller, and enough to make a small batch of pickled beets, cut a little bigger so they wouldn't be overcooked once I processed them in a boiling water bath.

I had planned to mix the pickling brine after the kids had gone to bed but that never happened. Instead I popped them into the refrigerator and figured I would get to it the next day. Three days passed and they were no longer in their prime. A quick google search provided the answer: Glazed Beets, except I decided to use honey instead. And I didn't have plain orange juice. Sigh.

1-3 cups of cubed organic beets, cooked
1. Mix all ingredients except beets in a small sauce pan. 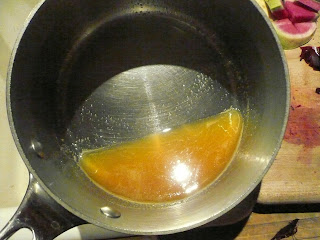 2. Cook on low until the mixture is bubbly and hot. 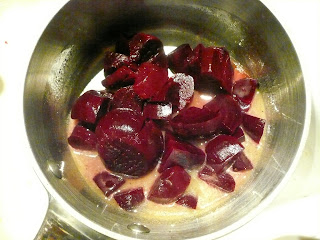 3. Add beets and toss.
4. Cook until the sauce thickens and beets are thoroughly heated.
5. Serve hot.

The verdict? Not much left for me to try or take a picture of. These were fantastic. Beets are something I am also not a huge fan of. My husband and kids on the other hand, love them. I am giddy to have found a way that I enjoy them too. And until I love them, these last tiny six pieces are enough for me. 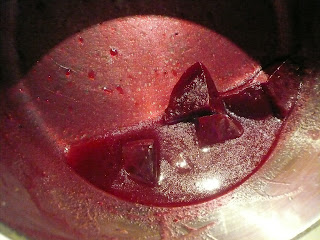 
This article was shared on The Chicken Chick.
Email ThisBlogThis!Share to TwitterShare to FacebookShare to Pinterest