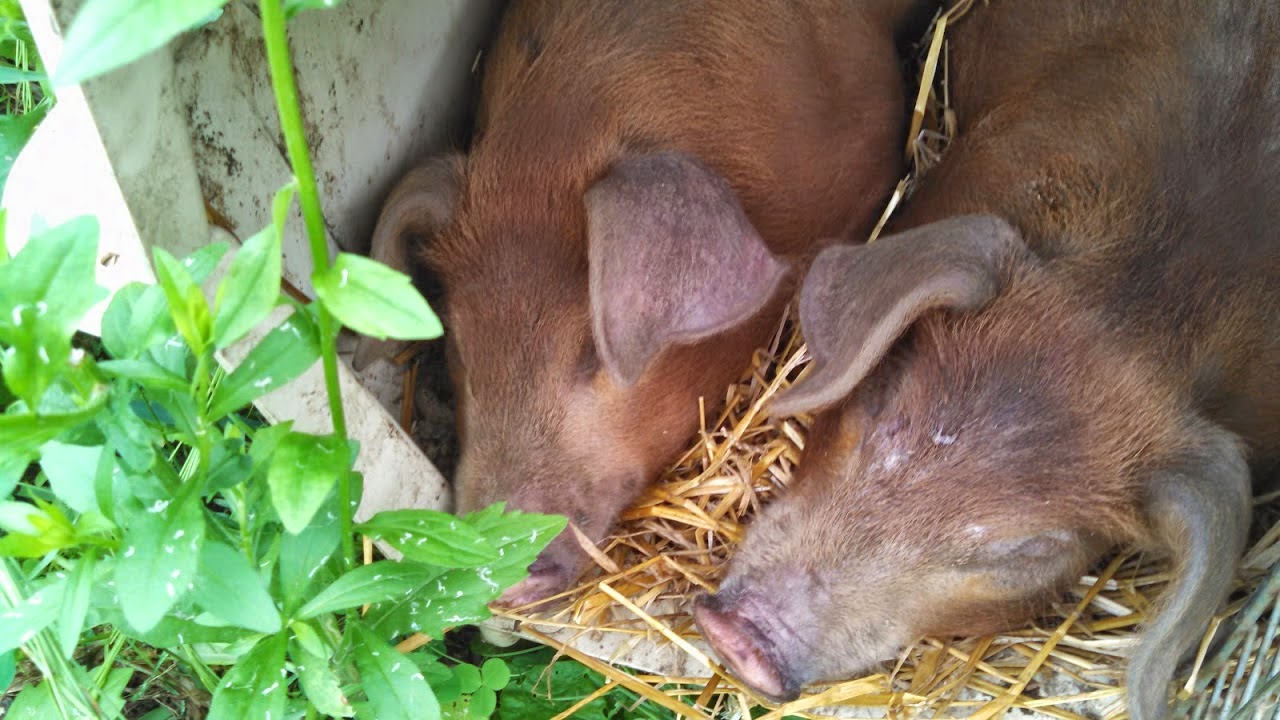 For those of you who read our recent goal update, you already know that we got two piglets.

We traveled about two hours to a small farm. Yes you read that correctly, two hours. Locally I was unable to find piglets that were less than $150 each, pasture raised AND fed an organic/non-GMO diet. I brought a large Rubbermaid tub that the farmer said should fit both piglets. We had the bin set up for chicks so the top had hardware cloth attached for ventilation.

We arrived to a drizzle and mud. We quickly realized that the piglets were not going to fit into the tub; the piglets were a little bit bigger than we (and the farmer) realized. We brought our tub back to the car with one piglet inside. After looking around, the farmer found an old dog crate that the sow had broken and tied the top and bottom together with twine. When I explained that I wouldn't be able to return it. She quickly said "not a problem, that thing is a POS anyway." While grateful to have something to transport our new piglets in, my stomach did a little flip.We tried to find a way to fit both the tub and the crate in. Not only was that not possible but it became clear that our tub was not going to hold the piglet in, when the piglet, sensing his herd getting farther away, leapt through the top. My fearless husband wrestled it back into the tub while we waited for the crate with piglet number two. After watching my husband, my former city boy husband manage to get the squirming and squealing piglet back in, my stomach bottomed out and all I could think was "Oh sh*t. I don't know if I can do this."
Disclaimer: Prior to this I had no experience with pigs. I had read all the books including Storey's Guide to Raising Pigs, cover to cover. I felt prepared. I was not.

After securing the crate as best we could in our car, with the crate entrance facing the hatch, we closed the hatch and headed home. The two hour car ride was tense. Every bump in the highway caused piggy mutterings in the far back. The first 30 minutes were the worst as all I could envision is what would happen should the piglets escape and I had to stop on the highway and get them back into the crate while protecting the 5 month old infant from 45 lbs of scared and trapped swine.

Thankfully they settled down and the rest of the trip was mostly quiet save a few grunted complaints regarding the accommodations. Once home, we pounded in two more metal posts to hold in place the large piece of metal that would serve as a temporary gate. Once the gate was all set, we placed the crate into the enclosed second garden, opened the gate and the pigs stayed where they were. It was a little anticlimactic. The picture above is them right after we realized that they were not planning on coming right out to explore.

The kids named them Breakfast and Snort. Although we were supposed to get two females, we received one female and one male. 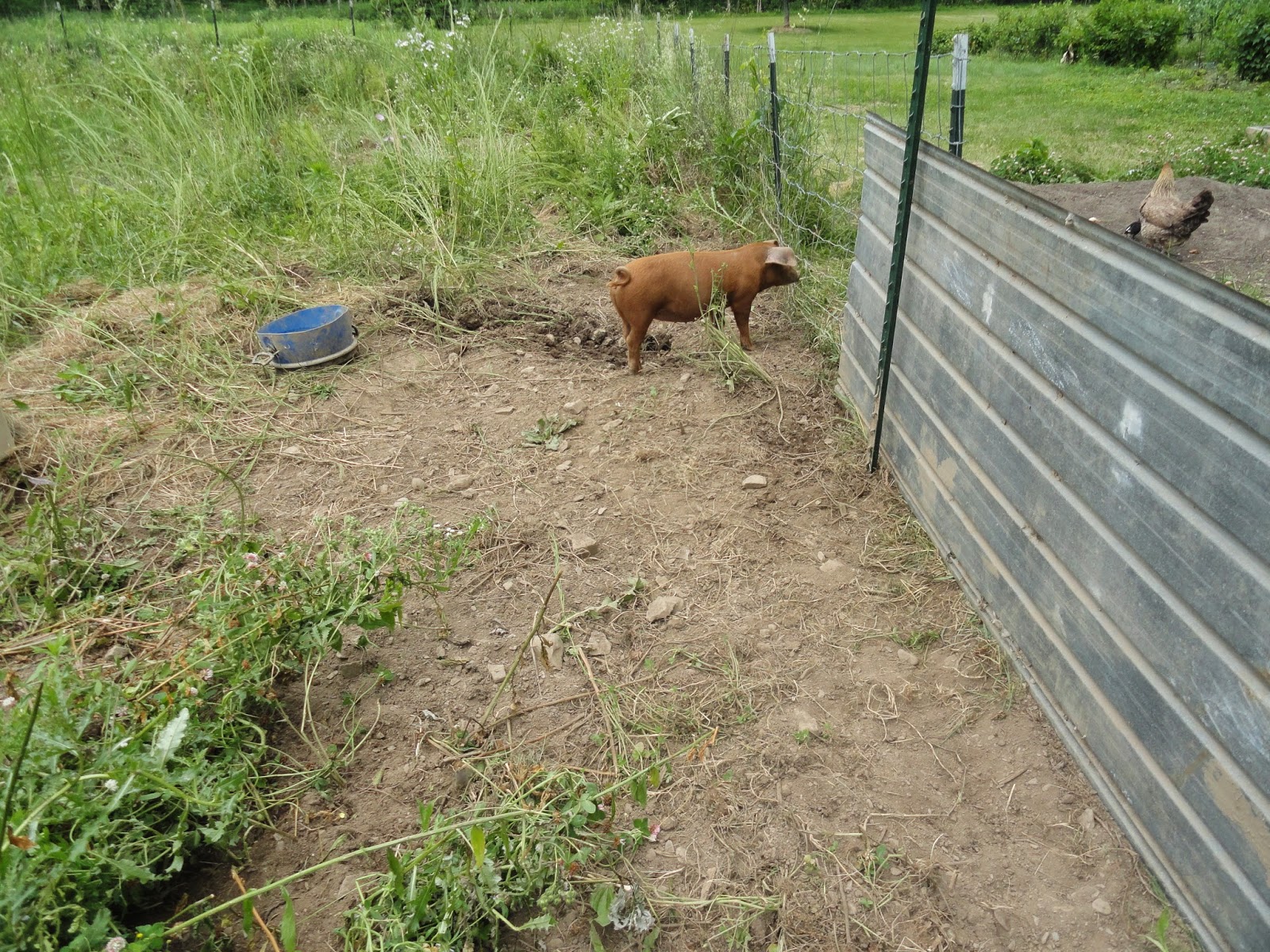 They lived in the second garden for about a month. Every day, I would bring their food in - Green Mountain Organic Swine Starter and leftover food and milk - I moved their feed bowl around so they would learn to follow me with a feed bucket.

The goal was to use the piglets to help us clear the weeds in the second garden then move them to a movable electric fence pen in the field. First we brush hogged where we planned to put the fencing. Next we put in two metal T-posts to anchor the solar charger and the gate. Then we put the fence posts in and ran the wire. We hooked up the wire to the charger and finally moved the pigs into the new enclosure. The brush hogging took less than a hour and the fence set up took less than an hour. 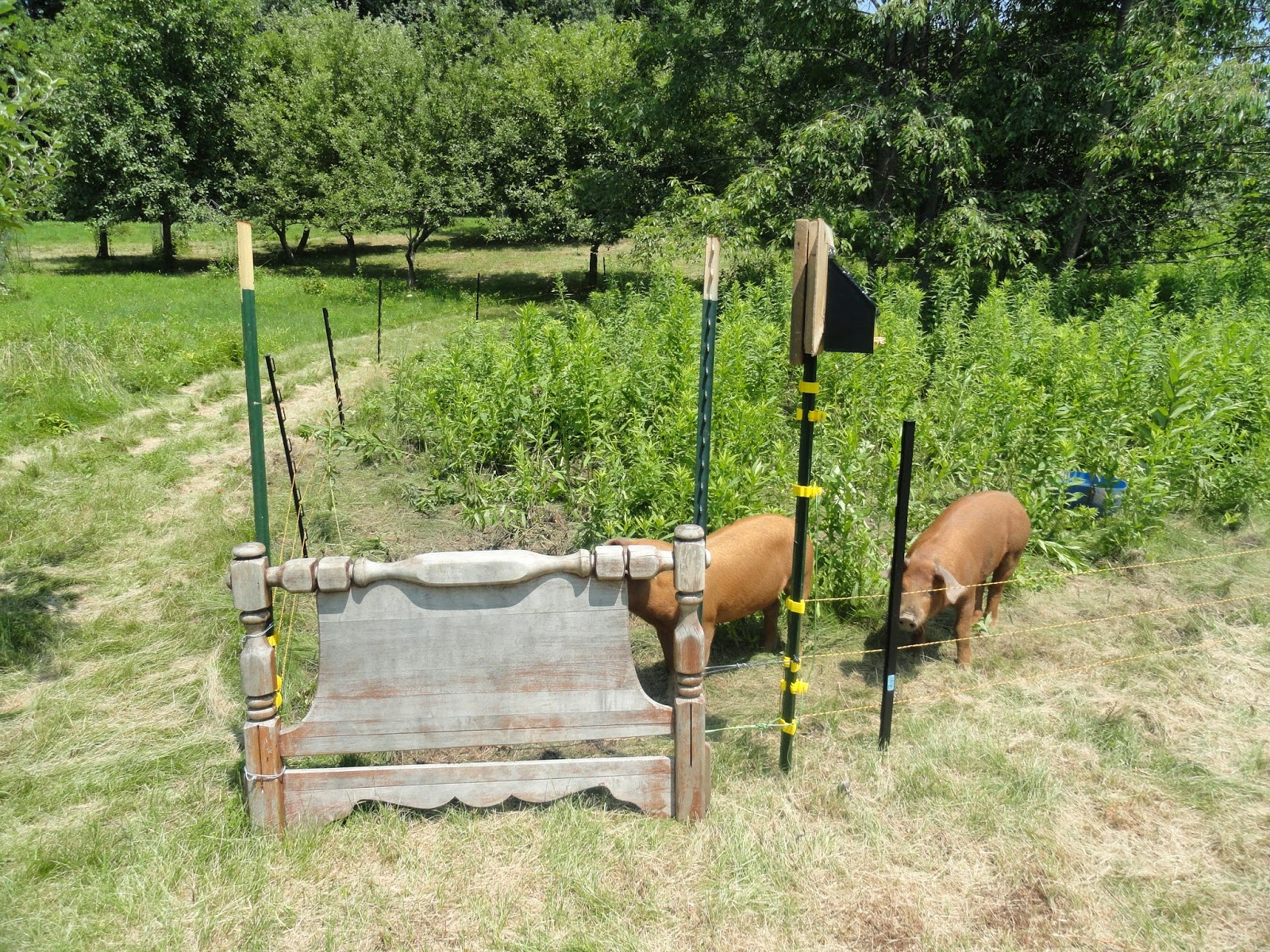 One of my biggest complaints when I was trying to figure out what I would need was a lack of understanding regarding cost and exactly what we needed. Here is what we purchased and spent:

So there you have it. Our initial set up costs were $442.69 including the two piglets.

Yesterday was my first real glimpse into how wrong things can go. The pigs rooted up and pushed down on the bottom wire of the fence and grounded it out. When I came to bring them water, one of the pigs pushed under the wires, accidently and BAM! The next thing I knew one piglet was out and was not interested in going back through the wires and turned on his curly tail and headed out into the unfenced field. As quickly as I could, I got the baby into the crib and ran to get some pig feed into a pail. Pigs run fast! Thankfully, the pig looped around and was more interested in the options available next to the first garden. With my bucket of pig food, I yelled "piggy, piggy, piggy" and took off running with the food. The piglet took one look at the bucket and began chasing me. Again, pigs can run FAST!. The piglet kept pace with me as I ran past the solar charger, turning it off and pulling up one fence stake and run up the hill to dump the bucket. The piglet, ran over the fallen fence and followed me to the feed trough. Total Score. I can see how it might be difficult if they get loose once they are bigger than the their current 90 lbs.

I am so excited to have pigs. I was definitely not as prepared as I could have been but it is kind of like having kids: no matter how much you prep, the real deal is completely different.

This article was shared on The HomeAcre Hop, Farm Blog Hop, The Prairie Homestead, The Chicken Chick,