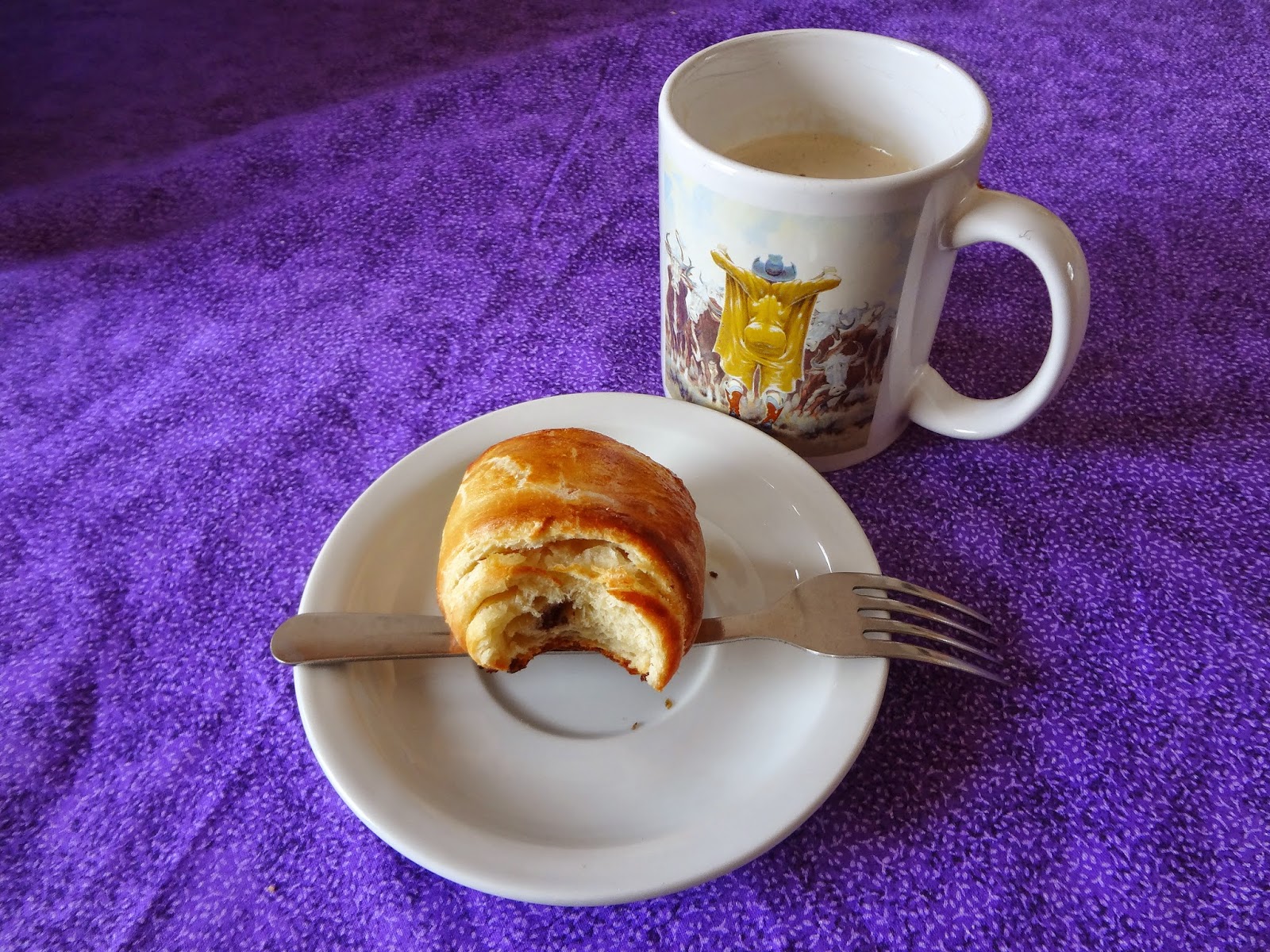 For L2's birthday this week, he asked for pain au chocolat aka buttery flaky pastry with dark chocolate inside. I decided that the crescent roll recipe we used for Thanksgiving, which was incredibly light and fluffy, would work fin and I would just make the dough a little sweeter and roll some chocolate in. The results were not exactly what I had hoped but were delicious none the same.

1. Combine the yeast and the warm water/honey in a glass measuring cup or small bowl, mixing until combined (no yeast clumps) and let sit for about five minutes until foamy and creamy.
2. Combine the egg, milk, butter, honey and salt.
3. Add the flour and the yeast and mix for about six minutes until dough is smooth and elastic.
Note: I put everything into my bread machine and used the dough setting. I had used the original 2.5 cups of flour the recipe called for and after the dough was done, it was too soupy so I had to add flour and mix by hand. I added 1/2 to 1 cup of flour.
4. Place dough ball in a greased bowl, cover  and let rest in the fridge for 30 minutes. (I skipped this step because it was the middle of the night and I was rushing. Plus I already had it turned out on the counter as I was manually adding flour and working it in.)
5. After 30 minutes, remove dough from fridge and roll out on a lightly floured surface to a large rectangle that’s about 1/4th inch thick. Spread your softened butter all over dough.
6. Fold one half of the rectangle towards the center and fold the other half over as well on top of the first layer so you have three dough layers. I rolled and refolded multiple times without refrigerating. Did I mention it was 11:30 pm?
7. Place in refrigerator overnight. You can just do 30 minutes if you want to use it that day.
8. Preheat oven to 400 degrees
9. Roll out dough again to a long rectangle.
10. Cut into long rectangles the size of your chocolate pieces. I used a bar that I cut into rectangles.
11. Roll up chocolate into each rectangle.
12. Allow to rise. I waited 30 minutes but the original recipe called for 1-5 hours.
13. Brush tops with yolk/water mixture.
14. Bake 12 minutes or until browned.
15. Serve warm.

Okay, I know that it sounds like a lot of work, but really, to make the dough took 45 minutes in the machine and another 10 to add in the flour. If I had just used my mixer it would have taken only about 20 minutes. Then I rolled it, spread the butter, another 5-10 minutes. Folded it and put it in the refrigerator. The next morning I rolled it out and put the chocolate in, 10 minutes, started the oven and waited for it to rise a bit (30 minutes inactive) and then baked for 12-15 minutes. The worst part about this recipe is that it takes time to rest and rise so it requires some planning ahead. I would gladly make these for a brunch because I could make them the night before.

The verdict? The kids loved them and they tasted nice and light. I think the Theo Chocolate 85% Dark Chocolate Bar

was a bit dark for me and I would prefer a little sweeter chocolate but that is all about preference. My husband thought the dough was sweet as well. 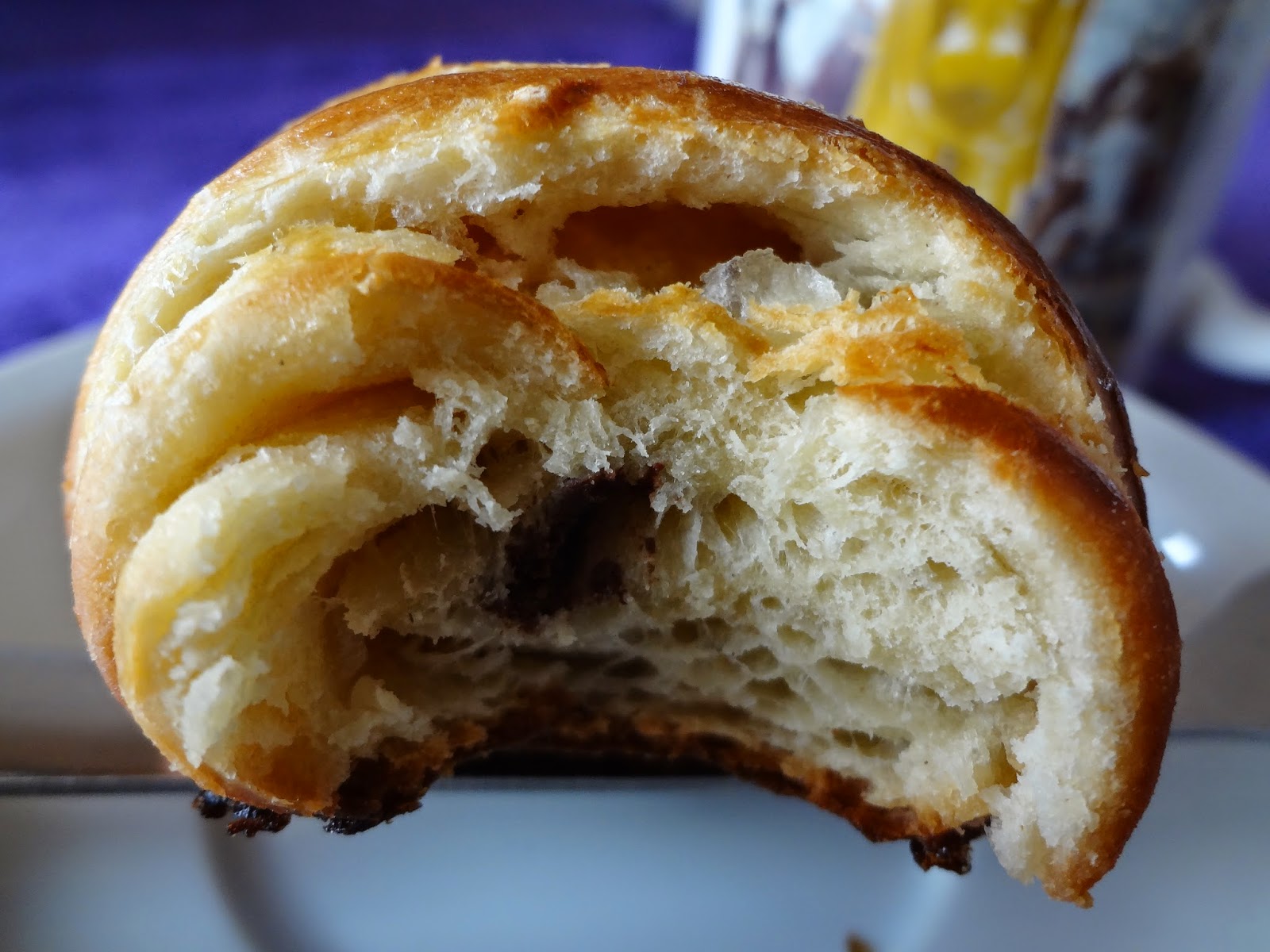 ﻿
Have you ever made a dough that requires all the folding?

This article was shared on The Homesteading Hippy, Little Blog on the Homestead,
*This article contains affiliated links.
Email ThisBlogThis!Share to TwitterShare to FacebookShare to Pinterest