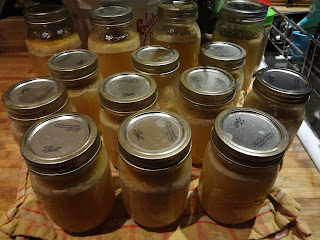 Did you reread the title? No, it isn't a mistake. Last weekend, I helped my dad butcher the six heritage Red Bourbon turkeys we bought last summer. We got them as chicks and then he raised them. That night he carved up one and grilled it. I was shocked at how tender the meat was. The few pieces that were overcooked were a little tougher but it was delicious. He carved up the rest, vacuum sealed them (sending 2.5 home with me! Sweet!) and started making broth. a day and a half later he called and told me he was dropping a pot of broth off so get ready to can. And can it, I did.

Before canning though I looked up whether I needed to skim off the fat because this broth was thick, almost like gravy. So many sources recommend skimming the fat, however the general consensus is that you can can it with the fat, most people just don't. So what do you do with the fat?

When browsing The Prairie Homestead's canning broth post (this is one of my go to sites for everything), I read in the comments that someone was using the fat to cook their vegetables. Talk about a light bulb moment.

I have been wanting to reduce my use of oil as they aren't exactly native/local or easy to produce myself. I have the back fat from our pigs and some that I purchased to make lard but I haven't gotten around to making it. Having been planning to make oven baked potatoes to go with dinner that night, I skimmed some fat off the top and put it into the refrigerator and canned the rest, fat and all. From now on, I will save my fat and put it in a container in the freeze for any time I make potatoes or vegetables. Just think, perfectly seasoned, baked carrots without having to cook an entire bird. I am having a Homer moment just thinking about.

Oven Baked Potato Chunks
5 lbs potatoes cut into bite size chunks
1/2 - 1 cup skimmed fat (This may seem like a lot, mine had some broth and wasn't pure fat. Start with a few tablespoons and add more as needed)
oregano, dried or fresh
minced garlic
salt and pepper
1. Preheat oven to 375 degrees
2. Place potato chunks into a large bowl and toss with fat until they are covered.
3. Sprinkle potatoes with oregano, toss and repeat until they all have some green on them.
4. Add minced garlic, toss and repeat until they all have some garlic on them.
5. Place on baking sheet and sprinkle with salt and pepper as desired.
6. Bake uncovered until soft on the inside, about 1 hour. The time depends on the size chunks. I tend to make mine smaller for the little ones in the house and the potatoes are usually done in 35-45 minutes. 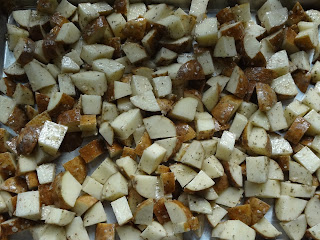 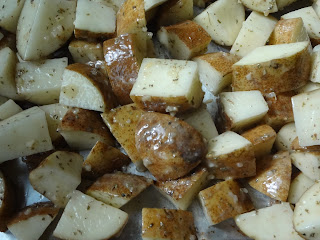 The verdict? These were delicious. Remember to add salt to them before baking, especially if your broth fat didn't have any. I under salted them a little and we had to add some but it is easy to add and impossible to take it away later so I always err on the side of too little. The fat added a faint hint of roasted turkey dinner with all the trimmings. That may sound weird but you could taste all the flavors that went into the broth in a bite size chunk of potato that was baked and a little firm on the outside and soft on the inside. Never again will broth fat not be saved and utilized. I can see it making a delicious rou for future gravy or a small amount added to rice. The possibilities are endless. 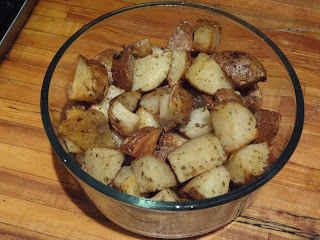 I would love to know if any of you use your broth fat for something else. Leave me a comment below.
Email ThisBlogThis!Share to TwitterShare to FacebookShare to Pinterest