Fall is here. Have I told you that? The chilly days seep into my bones and I want soup. Seriously, dinners need to be warm for me. Something that fills me up and keeps me warm during the evening. Hence the recent Cabbage and Potato Soup recipe.

Another way to do warm up? Add some spice. Now a few of you laugh when you hear me say that because I can only handle a little spice. I am a white girl of Danish and French heritage who lives in New England. I have nothing going for me in terms of learning to love and handle spicy foods so for me a little spicy goes a long way. I have no problem however, making foods a little extra spicy and eating it alongside bread or chips.
So, can you name a spicy summer food that is on it's way out? Peppers. (The title gave it away, huh?) Radish are a fall food but can also be spicy. I am not a fan of raw radishes because often too spicy for me plus they taste like peppers. Don't laugh but I don't like peppers either. I know after admitting how many foods I don't like you probably won't ever trust me again. (I will save the other foods I don't like for another post so you can come back for another laugh another time.) What can I say, I was raised to be a picky eater. This is something I refuse to let my kids be. They don't have to like all foods but they must try them all, multiple times in different ways. One of our dinner table rules is that you don't have to like it but you must try it. I work really hard at applying this rule to myself as well as the kids. I never tell the kids that it is a food I don't like or don't prefer because that would make them more likely not to like it. At this point the kids eat almost anything and I really believe that is a great thing. It is also one of the reasons that you will read about how surprised I am that I enjoyed a certain recipe. A book I have been meaning to read is The Man Who Ate Everything

. It is a really fascinating story of a man who works to overcome his dislike of certain foods. Some day...

I digress. Back to peppers and radishes. Peppers (and radishes) are really good for us and I like them in salsa and a few other things. We usually grow them in order to make salsa, however this year we didn't grow any so I bought a few at the farmer's market. I served them in salads, with eggs, with rice. But still I would pick up a few more the following week because pretty soon, they would be out of season and like the warm weather, there would be no more until the following year.

Our farmer's market ended the last weekend of September and here we are, a few weeks later with a couple of extra peppers hanging around the kitchen. In a last ditch effort to use up two of our red peppers, I decided to make red pepper pasta for dinner. You can of course use any kind of pasta, however the kids and I love making pasta so I figured what the heck, red pepper pasta was something different.

We have eggs, flour and the awesome KitchenAid Pasta Maker

so it is all kid friendly and relatively quick. (This is why you will see that we use pasta in lots of dinners. Not only is it easy to make, it is filling and we can use up any extra vegetables to make the pasta or to mix into it. In our house, pasta is always in style.)

First we made the pasta (another article on that another time), which is by far the most time consuming part of making this meal because the motor on the machine only pushes it through so fast. 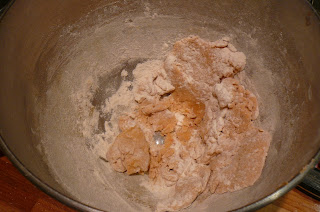 A cup or two of flour to one egg, some salt and the pepper juiced by my Immersion Blender

. (Sorry, we have been reading How the Dinosaur Got to the Museum

, which is one of those repeating books. The fact that we keep reading it, as in two to four times a sitting has clearly influenced my ability to write. The kids will loose interest, right? RIGHT?) 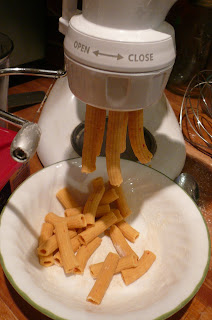 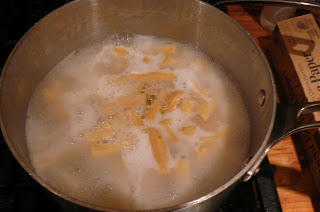 Mix the dough, let the boys take turns running the cutter, toss the pasta into some salted boiling water and BAM! We have fresh, hot pasta. Next, I sautéed some radishes in a little bacon fat a.k.a drippings with some salt. If I had been thinking, I would have chopped some red onions and added some garlic for a more in-depth flavor palate. (Like that? That's right, I have also been reading cookbooks and recipes. Sadly, I have not found any dinosaur cookbooks so How the Dinosaur Got to the Museum 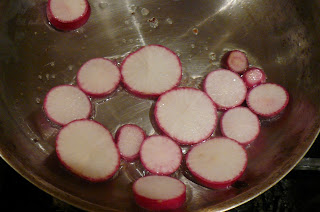 Once the radishes had soften slightly, about 4 minutes, I added the pasta to the pan, tossing them together.

It was served with carrot sticks as a first course, although I think broccoli would be a better, i.e. more colorful, choice. Top the pasta with some shredded Parmesan. The radishes loose their bite once they have been cooked. I found that I like radishes roasted so they have a touch of sweetness to them and the consistency of a oven baked potato.

This simple dinner took less than 45 minutes to make. If I had made the pasta ahead of time, it would have been a 15 minute or less dinner to put together as fresh pasta only needs to cook for 5 minutes or less.

Enjoy!
Email ThisBlogThis!Share to TwitterShare to FacebookShare to Pinterest